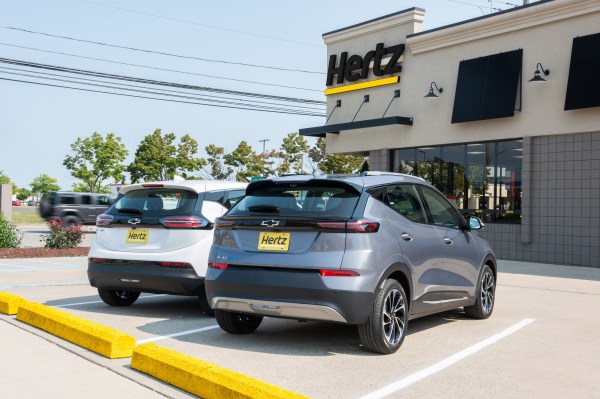 The car rental giant said Tuesday that it plans to order as many as 175,000 electric vehicles from General Motors over the next five years, with deliveries of the first Chevrolet Bolt EVs and EUVs expected to begin in the first quarter of 2023. Given GM’s broad upcoming lineup of electric vehicles by 2027, everything from compacts to SUVs to pickups to luxury vehicles will be leased through Hertz. Notably, BrightDrop, GM’s new commercial electric vehicle unit, will supply Hertz with its Zevo 600 van.

GM’s order is the latest in a series of deals aimed at boosting Hertz’s electric vehicle portfolio.

Hertz had previously signed deals with Polestar and Tesla to order up to 65,000 and 100,000 electric vehicles, respectively, to meet its goal of electrifying 25 percent of its fleet by the end of 2024. The deal is much larger and an indicator of GM’s production plans.

Historically, automakers have not flaunted purchase agreements with everyday rental fleets because cars, trucks and SUVs are often sold at discounted prices. However, the market has treated other recent EV fleet deals differently, possibly because it is seen as a bullish sign for EVs. Tesla-Hertz, for example, is well-received by investors.

GM Chairman and CEO Mary Barra said in a statement: “Our partnership with Hertz is a major step forward in emissions reductions and electric vehicle adoption that will help provide GM Create thousands of new EV customers.” “With the vehicle options, technology and driving range we offer, I believe each rental experience will further increase purchase consideration for our products and drive growth for our company.”

After the first deliveries of Chevrolet Bolts next year, GM deliveries to Hertz are expected to increase rapidly as GM ramps up production between 2023 and 2025, when GM has Ultium Cells in Ohio, Tennessee and Michigan. The battery factory is expected to open. GM has said it plans to have an annual production capacity of 1 million electric vehicles in North America by 2025.