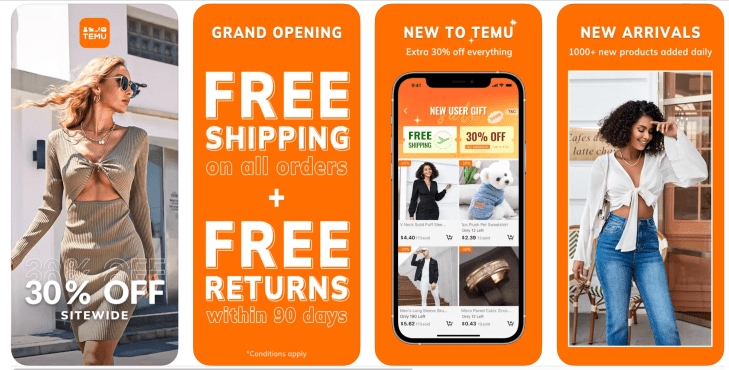 The race to bring Chinese-made goods to Western consumers via online stores is heating up.Chinese e-commerce giant Pinduoduo, known for delivering incredible deals, is quickly gaining momentum in its first international business in the US

The company’s overseas shopping app, called Temuaccording to reports, once occupied the top Android shopping app in the US in mid-September, but dropped to No. 15 this week. Application analytics platform Data.ai. The rankings show new downloads, so it’s hard to measure the app’s user retention and activity.

At first glance, Temu isn’t much different from other e-commerce platforms that export cheap goods from China, such as Amazon, Alibaba’s AliExpress, or Wish. Its landing page showcases a range of competitively priced products, from $2.77 shirts to $1.39 soap bars.

Pinduoduo is relatively late in the cross-border e-commerce field. Online retailers that import directly from Chinese suppliers or manufacturers can be found in almost every major market outside of China. Alibaba-owned Lazada and Tencent-backed Shopee are gaining a foothold in Southeast Asia. AliExpress is a popular choice in Russia.Shein, a fast fashion e-commerce site with expanding product categories, is the shopping app of choice for young people in Europe and America

Temu’s advantage over rivals may lie in its extensive ties to Chinese factories. Founded in 2015, Pinduoduo has risen rapidly to challenge Alibaba’s dominance more than a decade before it. The company’s meteoric rise owes its ingenious strategy to linking manufacturers directly with consumers, cutting out middlemen costs and ultimately allowing it to price products at far lower prices than rivals that rely on a tier of distributors.

It seems that Pinduoduo will continue to exert its strength in the process of going overseas.Just this week, the company Announce Invest “tens of millions” and “cultivate 100 export-oriented brands”. By doing so, the program aims to help 10,000 domestic manufacturers sell globally.

Temu leads the way in product sourcing due to Pinduoduo’s supply chain resources, but it may struggle to replicate the success of the user acquisition strategy that has enabled Pinduoduo to grow rapidly domestically. In the early years, Pinduoduo relied heavily on its investor Tencent’s WeChat app, where users shared deals with friends to get discounts on products.

The setup works because WeChat has gone far beyond an instant messaging app, with a built-in ecosystem of mini-apps seamlessly integrated with its social features, a user scenario that is missing from its Western counterparts like WhatsApp.

Temu may also face the same set of challenges as Shein. The fast-fashion upstart has repeatedly come under fire for its opaque supply chain practices and has been accused of intellectual property infringement. In 2019, the United States added Pinduoduo to its notorious blacklist of suspected counterfeiters, even though the company has pledged to crack down on counterfeit products.